You Rock – Do it Safely 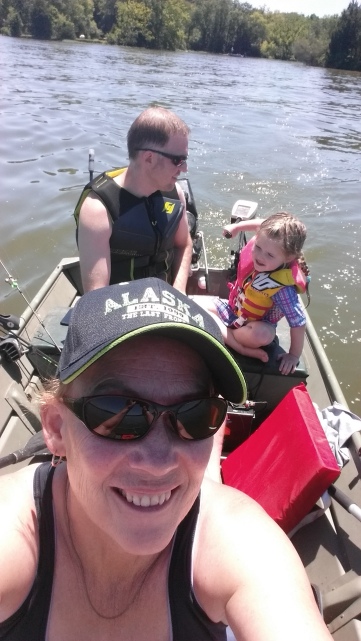 Four-year-old Avery waited impatiently beside her father’s little boat dancing excitedly, eager to get aboard and out on the water. A thin film of ice could be seen along the shores of the lake. Fish darted beneath the cold surface, rising sporadically to scoop bugs into their mouths.

“What’s this?” she asked, pulling on a bright orange plastic tube that hung from the zipper.

“That’s a whistle,” her father explained. “You can blow that to call for help.”

She blew into it, testing it out. The shrill sound echoed around the lake.

“Okay, that’s enough,” Allen told her after several loud bursts. “Climb aboard. And sit perfectly still while Daddy gets in.”

She followed instructions while Allen shoved the little open skiff off the shore. Powered by a gas motor, the little boat bounced and skipped across the lake surface as they headed out to a favorite fishing hole.

Avery decided she wanted to help by paddling the boat. She leaned down and picked up the paddle, focused on her goal. Allen looked up and shouted “No!” just as she pushed the paddle into the water at the bow of the boat and was suddenly catapulted into the air and directly in front of the boat.

Allen killed the engine and two seconds later, heard a loud whack as something hit the motor blades.

“My heard stopped,” he said. “I’ve never felt such terror in my life. I thought, was that my baby girl? Then I saw the bent paddle pop to the surface and a second later, Avery bobbed to the surface about 15 or 20 feet behind the boat.”

For a fraction of a second, Allen thought about diving into the water to grab his daughter but knew from his past training, that would be a huge mistake. Taking a deep breath to calm his nerves, he used a trolling motor to turn the vessel around. He could hear Avery blowing her whistle.

In less than two minutes he’d managed to navigate the boat to where his daughter bobbed on the surface of the water. He quickly scooped her out of the icy cold lake stripped off her wet clothes, wrapped her in his shirt and put her life jacket back on her.

“By the time we made it back to the car she wasn’t shivering as much and I knew she was going to be fine,” said Allen. “But that sure scared the life out of me and made me appreciate all the training I’ve had to be prepared. Had she not been wearing a life jacket that fit properly, we could have had a very different outcome.”

Emergencies and disasters happen every day. For Allen and Avery, their emergency quickly became an inconvenience rather than a disaster because they had prepared for the potential that someone in their boat might end up in the water unintentionally. But for every story like Allen and Avery’s that end happily, there are stories of people getting caught in situations they are not properly prepared for.

I remember one with two teenage boys who were snowboarding in Hatcher Pass wearing only cotton t-shirts and shorts because the day started out sunny and beautiful and they were hiking. By the time they reached the top of the slope, the weather changed and it started to rain and then snow. It should have been a swift ride down to safety on their boards but one of the boys got disoriented in the flat light and went the wrong direction.

He quickly went from hot and sweaty to hypothermic and his story ended in tragedy.

From wildfires to earthquakes to floods to winter storms, it pays to prepare so you will know what to do and have what you need when it matters most.

“This event got its start at the Mat-Su College,” explained Bea Adler, a member of the Local Emergency Planning Committee. “After several years, we just outgrew that space. Now with support from the City of Wasilla, AARP Alaska, the Mat-Su Health Foundation, Mat-Valley Federal Credit Union, other donors, partners, and a team of volunteers, we’ve been able to expand into the Menard Sports Center and bring our community much more.”

Adler says they are expecting more than 50 vendors, exhibitors and demonstrations this year. “We don’t want this to be just another expo where you walk around and look at stuff. We

want to present opportunities for people to be actively involved in learning how to prepare and stay safe in a variety of situations. If walking around and looking is all you’re up for, that’s fine, but this will also be your chance to get your hands on to learn by doing and really get prepared.”

The event is free to attend or exhibit. The first 100 people through the door will receive a free preparedness kit thanks to AARP Alaska.

A special feature of the Expo is a poster contest on the theme of emergency preparedness for youth from 4 to 18 years old. All entries receive a McDonalds gift certificate for a free ice cream and the top winner in each of five categories will receive a family emergency kit, a community service award, and recognition by the Matanuska Susitna Borough Assembly. Children can either bring to or create their poster at the expo on ‘What it means to be prepared’ or turn into Fire Station 6-5 (Palmer Wasilla Highway and Seward Meridian) during business hours before Friday, September 29th at 5 pm.